Ocean > Courses > by donation, course-show > Conservation and Creation “I am here Mukpo” Calligraphy 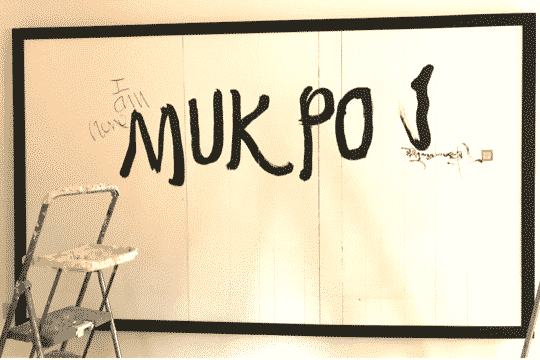 Conservation and Creation “I am here Mukpo” Calligraphy

In this presentation Ann will share stories about working with Trungpa Rinpoche on the conservation of his own creations, and how her fifty years experience regarding the care of sacred art affected her approach to the conservation of the “I am here Mukpo” calligraphy.

Prerequisite: Open to All
April 26 at 4:00 pm Eastern -- The presentation will be about 45 minutes, including Q&A

In this presentation Ann will share stories about working with Trungpa Rinpoche on the conservation of his own creations, and how her fifty years experience regarding the care of sacred art affected her approach to the conservation of the “I am here Mukpo” calligraphy.

This large calligraphy on wallboard, considered to be a profound work of sacred art, a beautiful calligraphy, a piece of history, a political statement, a damaged artifact, a conservation challenge, and perhaps only 2/3 genuine, inspires lively discussion.

In the early 1980s, in an old office building, the first Buddhist meditation centre was established in Halifax on Barrington Street. For a public reception and talk, Chogyam Trungpa calligraphed the words “I am here, Mukpo” (his family name) on a wall.

When the group moved, his students took two of the calligraphed wallboard panels with them (the first panel was structural), to their new centre on Tower Road. In the mid 1980s, members of the Buddhist community who moved to Halifax, Nova Scotia, would sign the back of the calligraphy with the date of their arrival.

When The Canadian Museum of Immigration at Pier 21 wanted to include the entire calligraphy in an exhibit, Ann Shaftel and her team re-created the lost first panel.

Following the exhibit, the calligraphy, large and vulnerable, was moved to an elementary school, then into storage, and then to a new Buddhist center where it went into storage until recently installed in a reception room.

Your donations for this presentation will go directly to ongoing conservation work with Buddhist monasteries and their communities, and for https://treasuresresource.com, a free preservation resource with practical information on digital documentation, risk assessment, disaster recovery, safer storage, and preservation of thangka and other treasures. Please give generously.

Ann Shaftel is a Fellow of the International Institute for Conservation, Fellow of the American Institute for Conservation, and member of the Canadian Association of Professional Conservators, ICOM AND ICOMOS. Ann works internationally in museums, universities, dharma centers, monasteries, and their communities. She directs the registered non-profit Treasure Caretaker Training, and has researched and worked in monasteries and museums since 1970.

Ann Shaftel
Accredited in 1997, conservator, specialization in thangkas. A Fellow of IIC and AIC. Began formal conservation training in 1972. After training at ICCROM in 1974, received a MSc in Conservation from Winterthur in 1978. Holds an MA in Asian Art History. Has worked with thangkas for 50 years, including a 15 year apprenticeship with a Tibetan painting master. Works as consultant and conservator for Buddhist monasteries, major museums and private clients. Services provided in English and Spanish. Private commissions accepted.

This forum is restricted to members of the associated course(s) and group(s).