Bio, Phil Karl Phil Karl completed undergraduate degrees in Psychology and Education in 1976 and earned his Master of Arts degree in Buddhist and Western Psychology from Naropa University in 1979. He formally became a student of Buddhism and of Chögyam Trungpa Rinpoche in 1977. Phil served as the Educational Director and as a core faculty member of the Ngedon School of Higher Learning (Buddhist studies) from 1987 till 2008. He has developed and taught courses in meditation and Buddhism in the US and Canada, at Naropa University, at four Shambhala International Seminaries, and served in the Office of Three Yanas Studies of Vajradhatu International; the organization founded by Trungpa Rinpoche. In 2003 he completed the traditional Tibetan three-year meditation retreat at Sopa Choling retreat center, Gampo Abbey in Nova Scotia. Following the retreat Phil established Tormas.biz to provide torma-making services to the greater Vajrayana practicing community 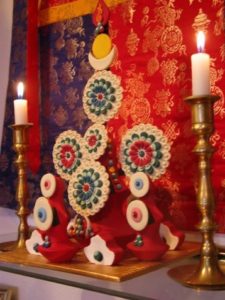