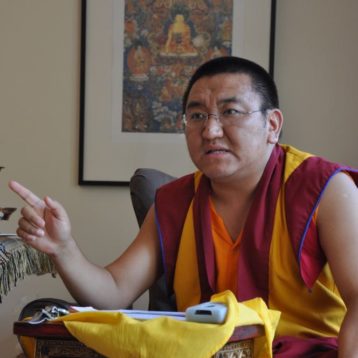 We are delighted and honored to announce that Changling Rinpoche will once again teach live on Ocean.

This will be a single class on Yeshe.

Changling Rinpoche was recognized by Dilgo Khyentse Rinpoche as the main tulku of Changchub Ling Nyingma monastery in Central Tibet. When Rinpoche was twelve years old, he entered Shechen Shedra (Philosophical College) and completed his studies at the age of twenty.

Since the death of Dilgo Khyentse Rinpoche, Rinpoche’s main tutors have been Trulshik Rinpoche, Dodrupchen Rinpoche, Taklung Tsetrul Rinpoche and Shechen Rabjam Rinpoche. Rinpoche teaches the senior students at Shechen College and those in traditional three-year retreat. He has also taught throughout the English speaking sanghas in Australia, Europe, and North America, and has worked extensively with Nalanda Translation.

Changling Rinpoche has held the position of abbot of the Sechen Monastery Shedra. Previously holders of this post include Mipham Rinpoche (1846–1912), Shechen Gyaltsap and Khenpo Gangshar. Trungpa Rinpoche was a student at the Shechen Shedra in eastern Tibet before escaping to India.

At Rinpoche's request: these teachings are open to students who have received an abhisheka in an anuttarayoga sadhana and beyond (ex: Vajrayogini, Chakrasamvara, Vajrakilaya, Kalachakra, Rigden and so on).