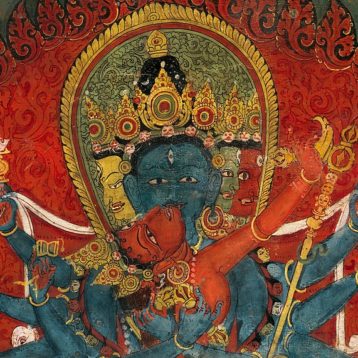 With the Dorje Loppon, Lodro Dorje

Sadhana practice is a profound skillful means, transmitting an entire universe of vajrayana principles. Over the course of nine monthly discussions, divided into three parts, we will discuss how to practice Vajrayogini as expressions of these principles.

Part One, September 29, October 27, and November 24 , will focus on the view and practice of mahamudra and the three samadhis; coemergent wisdom and luminosity-emptiness; and the Four Immeasurables and tonglen.

Part Two (starting in December 2019) will address Guru yoga and the four empowerments; the four karmas; and the nadi prana and bindu yoga of chandali.

Please note these new dates: Part one will include three monthly Sunday classes: September 29, October 27, and November 24
From 1:00, pm to 3:00 pm Eastern
Parts two and three will be announced later in the year


Open to Vajrayogini and Chakrasamvara students of the Vidyadhara, including those who received abhisheka from the Vajra Regent and the Sakyong